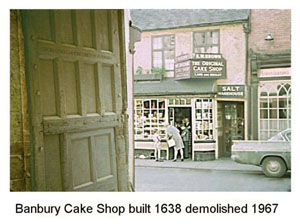 Back in the sixties one of Banbury CCs members, Ernie Lester, became concerned about the destruction of many of Banbury’s old buildings. He persuaded the club that it would be a worthwhile project to record anything in danger of disappearing. By 1965 a set of slides had been produced and was being shown with recorded commentary to local dubs. Over the years. members have added to the original set. In 2006 it became clear that the project needed to be revived and overhauled.

We received a grant from the National Lottery to undertake this task. We bought a good quality laptop, digital projector, screen, projector trolley, 35mm film and slide scanner and photo-enhancing software. I volunteered to start work on the project. Every slide. negative and print was scanned at high resolution. Later we noticed that the collection had some shortcomings. There was, for
example, no photo of the old Banbury CakeShop in ParsonsStreet. 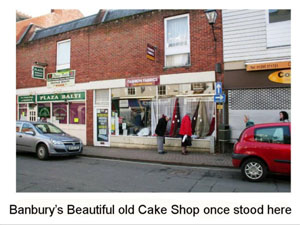 Some members had their own suitable images and they donated on the premise that their copyright was maintained. This idea caught on quickly and soon donations of all kinds were made. Donated images are scanned and returned to their owners and to date we have over 1500 images.

The project is ticking over nicely with new images being added every week. Also. we have developed a circle of knowledgeable Banburians who help us with some of the older photos.
The Images of Banbury collection is a valuable resource of interest to schools and other organisations. I’ve put together several presentations, with recorded comments, to show local groups. A popular show is “A Walk Around Banbury”, showing the enormous changes that have taken place since the 1960s. We get a great deal of information about the photos this way and have made many friends.

Back to Café Red