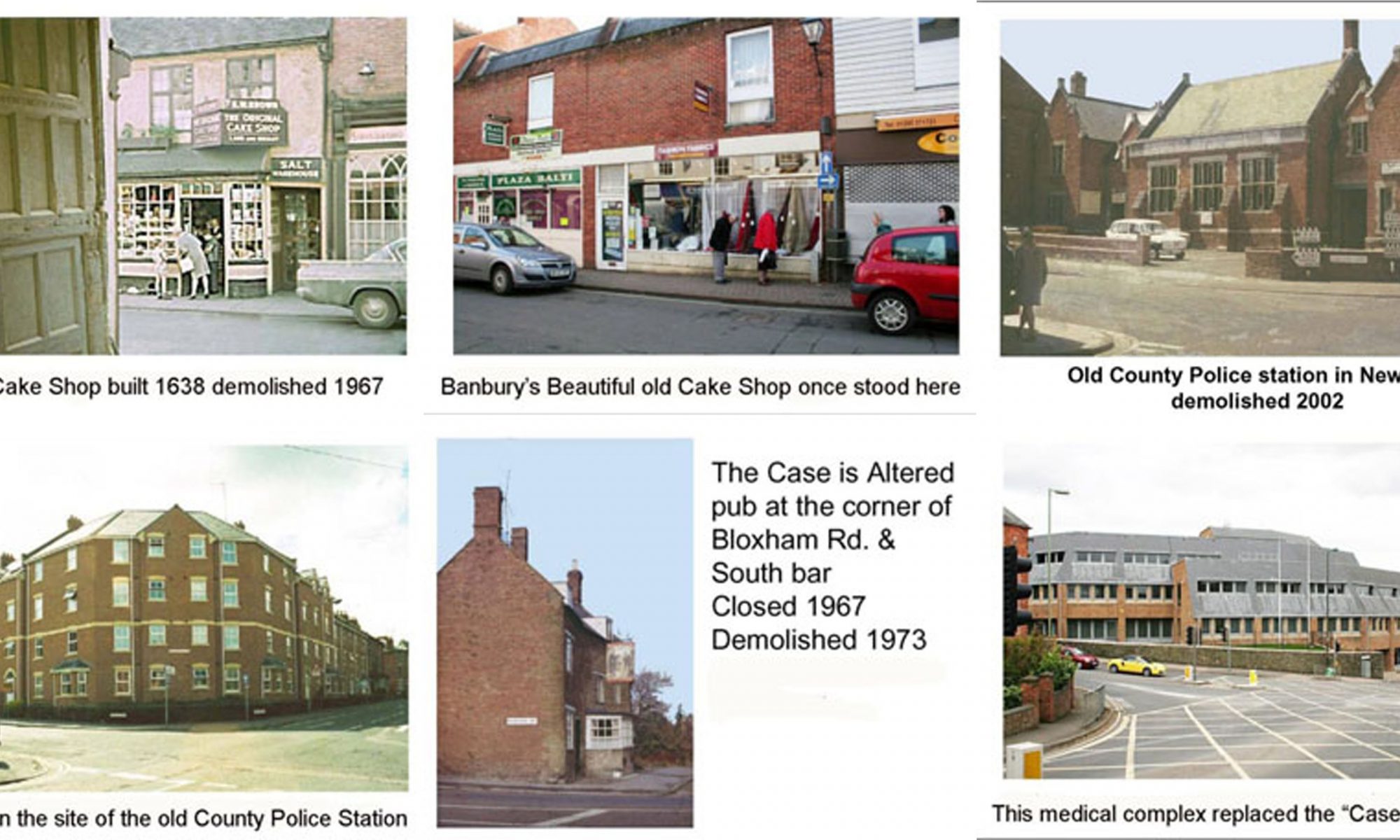 In 2013, Andrew Spackman brought to the club a set of 266 slides, which had been given to him by Isobel Smith’s daughter. The slides had been taken in Banbury some years ago by various members of the club. Andrew asked if anyone would take a look at them and report back to the committee. I was happy to do this because another of my hobbies is the study of the history of Banbury.

I examined the slides and made a record sheet for each to enable me to manage them. At one of our practical evenings I projected them just as they are. A number of club members who saw them thought that they were not up to the standards we normally expect at BCC; there are a few excellent ones, but the majority are definitely not fit to show at the club. There are also
numerous slides of the same subject.

It turned out that the “Good” set , consisting of 150 slides with the title “The History of Banbury”, was being looked after by Michael Clifton. He handed them over to me and I made a record sheet for each one of these also. To accompany these slides were two commentaries
(incomplete), which I rewrote. Because of the title “The History of Banbury” this set contains several explanatory slides, which are photographs of illustrations from history books.

In order to include the better slides from Isobel’s set I decided to make a slightly different show with the title “A walk round Banbury” so that the audience could see the best 150 slides from the 416 which make up the collection. There were, however, numerous problems; most of the slides are old and dirty, some appear to be sticking to their glass mounts, they are not all of the same make of film, some are under or over exposed, some I can’t identify at all etc. The solution was to scan them and enhance them as far as possible using Photoshop. About 160 were given this treatment and the remainder left for later, none have been discarded because, although they are not good enough or inappropriate to put in this show, they could well be of interest to historians and it may be possible in future to enhance them with better equipment and software than I have at present. After a few experiments I was able to make a Power-Point presentation on CD and DVD suitable for showing with a digital projector.
I thought that the show should last about an hour, depending on the number of questions and comments from the audience, but when I showed it at the club for the first time on the 12th. of November , it lasted the whole evening. It seems that 150 images is about the right number.

So far so good, but I was disappointed that the collection as it stands does not include photographs of some important buildings or their features. For example, I felt that in a show called “The History of Banbury”, there should have been a picture of Brown’s Cake Shop in Parsons St. “Someone in the club might have one” I thought. This was when I had the idea for an “Images of Banbury” project.

The “Images of Banbury” project

The idea is to make a collection of all kinds of images of Banbury which would be a useful photographic archive in its own right and from which shows could be compiled on a variety of themes.

Any member of Banbury Camera Club who owns a photograph of a building, an event, or of a famous local person etc. could let the club scan it and use it in a show. The photo would be returned as soon as possible to its owner; only the scanned images would be stored. Any print, negative, slide or digital image, coloured or black & white, could be included; the
main stipulation being that it should be the member’s own property and s/he should own the copyright.
Anyone wishing to use one of these images for commercial purposes would have to get in touch with the owner, under no circumstances would the club allow any infringement of the owner’s copyright..

I have my own collection of photographs of Banbury and I am willing to lend some of them for this project including a slide of Brown’s Cake Shop mentioned above. The whole collection would be kept on DVD, CD and/or portable hard drive. At least two members of the club should look after the collection and each would have a complete set of discs etc. Preferably, whoever agreed to do this job would also be prepared to show the slides to other groups.

As for the 416 slides we have in the collection at present, it is not possible to return most of them to their owners, which means that we will have to store nearly all of them somehow. I told Banbury Museum that the slides are in two boxes each about the size of a laptop computer and asked if they would look after them for us. The short answer was NO. Ray Jordan has been in touch with the National Media Museum who have given him details about storing slides etc. Basically one should keep the slides dry, and cool and avoid temperature fluctuations. Suitable boxes etc. are available and don’t cost much.

I have made an A3 chart explaining the use of the record sheet and produced a list of the reference books I used together with their ISBN numbers. All the record sheets have been put into an Adobe Acrobat document; with which I can search through all the typed words in the records and get a listing almost instantaneously.
If I type in the word “Cross” it will find and list 26 images of Banbury Cross.

Thus we have an archive of scanned images, together with any relevant information, from which we can select sets of pictures to make up various different shows, each of which could be compiled with emphasis on some particular topic. If this were done sensitively I think that we can make up a few entertaining shows depending on the number of good images at our disposal. A show doesn’t have to last the whole evening, a short show can be used in one of the new “Evenings of two halves” Each show could be intended to appeal to a specific audience, the pensioners in the “Times Gone By” group would probably spend a long time reminiscing when they saw the 40 -year old slides. Such slides might not, however, appeal to a younger age group. I once helped to make up a little fun quiz called “Look Up” using recent photos of details of the upper parts of buildings in Banbury, The game was to guess where the building is. Each member of the audience was given a numbered list on which to write down the answers, the winner was given a small prize.

To illustrate some of my ideas I have made a second show using a selection of my own slides, negatives and prints (where I can’t find the negatives). We could keep this show for an emergency if, for instance, a speaker cannot get to the club because of bad weather. It is not particularly structured but it gives some examples of the sorts of things I have in mind. There seems to be broad agreement about the procedure I have outlined above and the need to get some more up-to date equipment such as a digital projector, our own laptop computer etc., hence the bid for lottery funding. I am only one member of the club and there must be others who have similar collections of images of Banbury and who would be willing to lend them for scanning provided that their respective copyrights were fiercely guarded, indeed some members have “Jumped the gun”
and already given me some images which I have scanned and some ideas which I have listed on a separate page.