One of the most pleasing astronomy photos you can create are long exposure star trails, and they are always a real crowd pleaser. The huge bonus is that they are relatively easy to create, even with very basic equipment and some free software.

I have had a passion for astronomy my entire life and I hope I can share that passion with you through this page. I am a passionate astrophotographer and my photos have appeared in local press and on local and national television. I am also a writer of astronomy articles and blogs and recently started writing for Sky at Night magazine.

In addition, I am a co-presenter of a radio show on a specialist astronomy radio station and have made several appearances on BBC Radio Oxford. This page contains a month by month guide to things you can see in the night sky from right here in Tackley, including times for passes of the International Space Station and Iridium satellite flares. It also contains links to a series of astronomy articles and blog posts that I’ve written.

You do not need any specialist equipment to enjoy looking at many things in the night sky. We have great skies here in Tackley, so I hope that I inspire you to go out and look up, and maybe even try some

My lectures are entitled “Every Picture Tells a Story”, and these talks are on how to set up feeding stations, build hides and photograph all aspects of fauna and flora. They also explain the equipment needed and where to photograph certain species of wildlife.

My name is Peter Preece and I am a Wildlife Photographer. I hope you enjoy slowly browsing through the images shown which I hope to add to and update on a regular basis.

For many years both myself and my wife Margaret have belonged to local Photographic Societies, including Smethwick, Solihull, Droitwich and our local club, Cookhill and Studley. We are both retired and spend a lot of time travelling around the U.K. and Europe photographing everything we find, from insects to animals.

Over the last 12 years we have visited about 900 venues where Peter has shown his illustrated talks to Natural History Societies, Photographic Societies, W.I.’s, Probus Clubs and other organisations interested in Wildlife.

A lot of our photography is done from hides situated in areas where we attract in birds such as jay, buzzard, nuthatch etc. and are based in Warwickshire close to where we live. These hides are baited up every two days to set up feeding stations which have produced many successful images in national and international exhibitions for both ourselves and people who have been invited to these hides.

I have been a keen photographer for a rather embarrassing number of years. I enjoy most types of photography, but most of all, I enjoy images of nature and wildlife.

My work has been published in many magazines, newspapers & on TV – I have also taken part in exhibitions at the Royal Greenwich Observatory and also at the Royal Geographical Society.

I have also been fortunate to have 2 of my images appear on the NASA run Astronomy Picture of the Day (APOD).

My latest talk for photographic or camera clubs is about “Movement in Photography“.  Covering the effect of camera movement, subject movement, and both together.

I’ve been a professional photographer for the whole of this millennium (!), but have been an enthusiastic photographer most of my life.  I’m passionate about my photography, and I also love looking at other people’s photographs and learning from them.

On becoming a professional, my contemporary portrait and wedding photography was quickly recognised by my peers with numerous awards, including the Master Photographers’ Association Regional and National Awards. My images have been published in the Observer colour supplement, France magazine, the journal of the Royal Photographic Society (RPS), the RPS Portfolio One, national newspapers, international textbooks and trade magazines, and I have hundreds of images in the Alamy photo library.

Passion for photography has also inspired me to help others improve their own photographic skills and creativity, particularly helping photographers to find new ways of seeing.  I’m honoured to be a regular tutor for Royal Photographic Society workshops in Bath, as well as offering you bespoke photographic training.

My most successful pictures either tell a story or contain detail that requires the viewer to look and seek images within images. Consequently not all my pictures have immediate impact but most have ongoing appeal. All techniques applied to my photographs are subtle with the intention that the viewer will focus on the image’s pictorial content rather than wondering how it was created.

I was initially inspired and taught by my father, John Sutcliffe FRPS. My enthusiasm for photography as a hobby took off when I bought and fell in love with the newly introduced auto focus Minolta 7000 SLR camera in 1986.

I achieved the accolade of Licentiateship of the Royal Photographic Society in 1989 and met Alan Millward FRPS. Alan has become my soul mate and together with my father has inspired and taught me ever since. After a long engagement, Alan and i were married in November 2009. My father is now 98 years old and remains a member of the Royal Photographic Society although he closed his darkroom in 2005.

In 1991 I became an Associate of the Royal Photographic Society with a panel of transparencies that are most easily described as environmental portraiture. The images in my successful panel were all taken in Rajasthan.

By 1992, I had a significant number of acceptances in international photographic exhibitions sponsored by the Photographic Society of America and the Federation Internationale de l’Art Photographique.
My photographs were accepted in pictorial, nature and photo-travel sections. Despite this success, my style was ill defined. After eleven years of effort which included mastering darkroom colour printing and latterly digital printing, I eventually found ‘my style’ and in 2003 was awarded a Fellowship of the Royal Photographic Society (FRPS). Shortly afterward, I became Artiste Federation Internationale de l’Art Photographique (AFIAP). In 2009, following further exhibition success I was awarded my EFIAP.

I enjoy lecturing and judging club competitions. Both these activities allow me to share my knowledge and enthusiasm for photography. I have also judged international photographic exhibitions in England, Scotland, Ireland and the USA.

And the second Item today is a Miranda Flash gun . 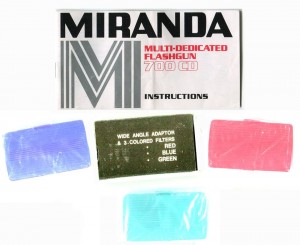